Hey, so this week’s update is gonna be about a lot of things, but before we start: I noticed that my devlogs are getting somewhat longer. So to start countering that, I’ll be including a TL;DR at the top of the post, so you can still get what this week was about, without reading my wall of text.

If for whatever reason you do that, I still recommend reading the whole thing so that you’ll know everything rather than an abridged version :)

So, one of the first thing you’ll notice in this post is the pretty GIF banner showing off a new aesthetic for Clarice! I really love how much cuter she is! I honestly didn’t think I could ever come close to something being cute in pixel art; I’m a programmer nonetheless, so imagine my sense of achievement.

Funny fact: this sprite is actually inspired by the random island generation! When I was making some banners for social media and other platforms, I noticed a sprite-shaped island in the background. When inspecting that island, changed its colour and adjusted its shape, I got the new look for Clarice!

Obviously, the silhouette of Clarice can be further improved and while making this post, I’m still thinking that there’s something appealing that I didn’t translate from the island onto the sprite. But that’s for another update!

Hair in the wind

Some of you might’ve already noticed some weird new addition to Clarice, which is an extension of her hair in the game that seemingly has a life of its own.

It does! I thought I’d take a page out of the book of another great indie game which won game of the year (guess the game), and make the hair be animated based on the environment and physics of the game. Now it’s only a matter of time before my game becomes GOTY /s!

So how did I do it? It’s actually relatively simple, so I’ll quickly walk you through what I kinda did. For those who are extra excited, you can always take a look at the actual code in the cartridge when it comes out or if you peek at my devlog over at Lexaloffle’s PICO8 forums .

For drawing the hair, we’re actually drawing just three small circles in pink, purple and pink again. This is to give the hair some more dimension than just 3 pink hairs. The purple circle also serves to provide some depth.

Now, we take the hair/circle that’s the furthest away (aka the last one), point it in the direction of a period p and give it a radius of how far away from the character it should be. Now, when we change p, we effectively change the direction of where the hair should go:

Now when we give this `p` the value of the wind direction, we're starting to physically animate our character's hair!

Next up, we just place the remaining two hair circles at a fraction of the outer hair vector, and it should follow the end hair, making it seem attached. Just make sure that the fractions aren’t too big or too small; otherwise, the circles of hair will disconnect.

And that's some very basic hair that's animated by the wind! To improve it a bit, I added a value called `strength` (value between 0 and 1) that determines how much resistance Clarice's hair has. When the value is 1, the wind doesn't affect the hair and it remains in its natural pose. When it's 0, the wind has maximum effect like the GIF above and determines the hair's direction. It's when you modulate this `strength` value where the real fun begins. The control and loss of control over the hair makes it seem as if the wind is blowing at differing speeds, causing the hair to sometimes blow and sometimes return to shape.

The challenge now becomes to link this further to a "wind strength" variable that goes together with in-game events like spells being cast or bosses arriving! Hopefully this makes sense, or it at least looks somewhat cuter than what I had before :) 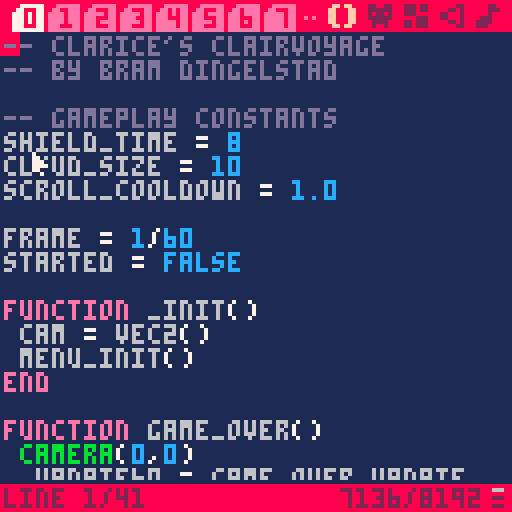 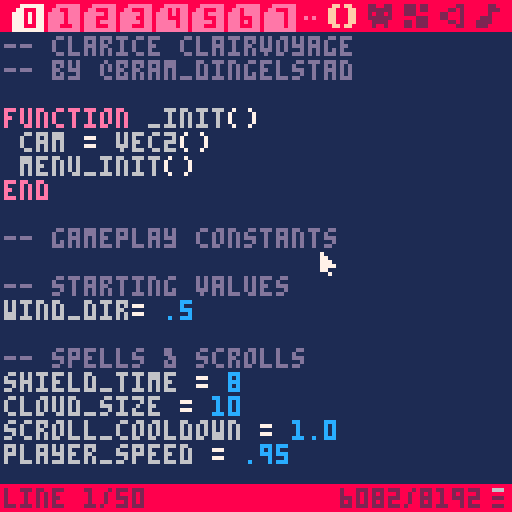 I did a major refactor of all the code to bring the token count waaay down from 7136 to 6082! I’ve gutted some leftover features and dangling variables, made some code more generic and cleaned up the util functions, but dropping a full 1000 tokens while also adding hitboxes and making cool hair was beyond my expectations. Of course, we still have a long way to go with the game and having only about 2000 tokens left is still a little too close for comfort to me, so we’ll see how I’ll manage.

Besides re-doing Clarice, I’ve also been busy re-doing the old assets for the spells/scrolls. The old ones were kind of just dots of colour in the middle of the page representing the element, nothing too fancy, or even exciting. I did some tests of the new versions with my friends and they seemed to think it was a major improvement on the game!

Not all of ‘em are perfect or super descriptive for the spell they’re representing, but it’s a good start!

Thanks for reading my devlog of this week. If you liked it (or if you didn’t) or you learned something from it (or you’re thinking you already knew this, but still think it’s interesting): leave me a comment, show me your support! It really keeps me going with this project, honestly (kinda the only thing that keeps me running tbh)!

Thaanks, and see you next week!

Hey there! My name is Bram Dingelstad and I'm an indiedev. I write articles sometimes.